News Gothic  is actually the standard American sanserif typeface of the first two thirds of the twentieth century. It was originally prepared for ATF by Morris Fuller Benton in the year 1908 under the name News Gothic. The Trade Gothic follows News Gothic exclusive of its widely-spaced straight-sided boldface rooted in ATF Alternate Gothic No.3. 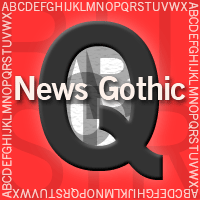 The beautifully designed lettering goes well with News Gothic Bold, a boldface version that originated right at Intertype, with Trade Gothic Bold No.2.