Bellissima Script Pro  font can be referred to as the typeface having similar vein and spirit as Burgues and Compendium. However, the font still started with a unique thread as those fonts. It was initiated with Alex Trochut who liberally displayed beautiful lettering book from discreet library of in the year 1844.The Latin calligraphy pioneers introduced a sophisticated English calligraphy version in Spain and allowed it to grow popular in the 19th century. 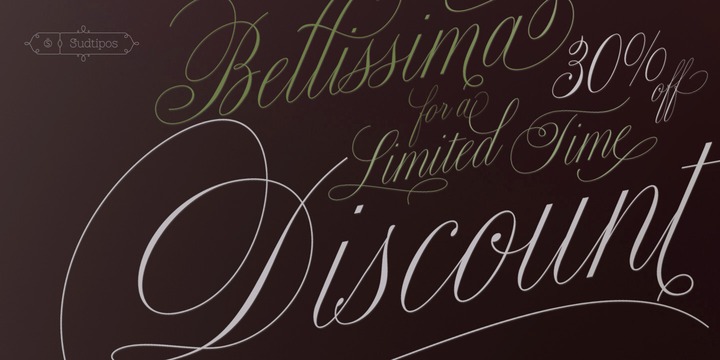 The basic motive was to move from high-spirited ornamentation of Stirling and ensure simplified forms. Bellissima Script Pro, the complete font is an vociferous energy that appeals beyond its foundation.

This website uses cookies to improve your experience while you navigate through the website. Out of these, the cookies that are categorized as necessary are stored on your browser as they are essential for the working of basic functionalities of the website. We also use third-party cookies that help us analyze and understand how you use this website. These cookies will be stored in your browser only with your consent. You also have the option to opt-out of these cookies. But opting out of some of these cookies may affect your browsing experience.
Necessary Always Enabled

Any cookies that may not be particularly necessary for the website to function and is used specifically to collect user personal data via analytics, ads, other embedded contents are termed as non-necessary cookies. It is mandatory to procure user consent prior to running these cookies on your website.